For a more tutorialized explanation of the content described in this article, see Orbis on the Hytale Community Wiki. 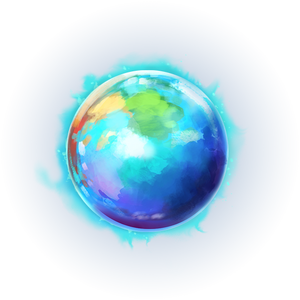 Orbis is the alterverse where most of Hytale's storyline takes place.

The world of Orbis is created when a player creates a new world from the world creation section of the main menu.

Hytale generates zones using randomly-generated "noise", random numbers generated by the game's generator, to create height maps for the terrain that control the positioning and density of blocks in certain areas of the zone. Noise maps are combined and tweaked to create varied terrain.[1]

After the basic terrain structure is created, different layers are then applied to it. These layers are noise maps that control what types of blocks to generate and where to cluster these blocks. Once the layering step is completed, covers are then added to the terrain. These include environmental details that are dependent on where they are placed in the world, for example shrubbery on the surface and moss underground. Different prefabs are then placed into the world to complete the game's terrain generation.[1]

While concept art for Orbis shows a planet with finite surface area, the world actually generates infinitely outwards horizontally.[2] How the world is limited vertically is currently unknown.

Orbis features at least six zones: Emerald Grove, Howling Sands, Borea, Devasted Lands, and two unannounced zones. Each zone has its own set of biomes, coastal features, blocks and other content such as furniture sets, creatures, plants, weather, and geology.[2] Underground areas, including caves and dungeons, also generate differently depending on the zone they generate in.

Zones continue into the oceans, and if players venture out far enough they will encounter a sudden drop-off at the edge of each zone that leads to the deep ocean. The infinite lands lie beyond this drop-off.[2].

Biomes are sections of zones that generate unique terrain, plants, and structures. NPC spawns may also be biome-dependent.

Prefabs are collections of blueprints for creating structures inside of the world. Certain prefabs are decorative, while others advance the game's storyline. The types of prefabs that can be generated at a given place are determined by the zone and biome where it is being generated.

Orbis is filled with many different kinds of NPCs, from animals like the wolf or fox to monsters like zombies or skeletons. Intelligent NPCs group themselves into factions, living in settlements scattered throughout the world.